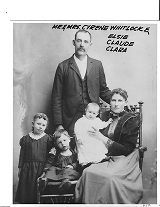 Studio portrait of Cyrenius A. and Edith Marian (Parker) Whitlock and their children. Cyrenius was born in Fremont Township, Breckenridge County, KS, in 1861, the son of William and Mindful (Dixon Anderson) Whitlock. Influenced by his younger half-sister, Grace (Furman) Rosean, Cyrenius or “Rene” came to the Stillwater County area in about 1890, according to the Jim Annin account, and located on the Stillwater River. He married Edith Parker, born in Minnesota in 1873, on January 24, 1894, at Rapids in what was then Yellowstone County. Edith was the daughter of Andrew and Anna Marie (Stiles) Parker, who had moved to the Park City area in 1882. The Whitlocks lived in Stillwater County until about 1900, when they homesteaded in the Belfry area, then moved to the Siskiyou, CA, area, where he continued to farm until his death on October 12, 1935. Edith died at Beaumont, Riverside County, CA, in 1961.

Partner
Big Sky Country Digital Network
Contributing Institution
Museum of the Beartooths, Stillwater County, Columbus, MT
Subjects
Homesteading
Location
Stillwater County, Montana; Carbon County, Montana
Type
image
URL
http://cdm16013.contentdm.oclc.org/cdm/ref/collection/p16013coll26/id/161
Standardized Rights Statement
In Copyright:This Item is protected by copyright and/or related rights. You are free to use this Item in any way that is permitted by the copyright and related rights legislation that applies to your use. For other uses you need to obtain permission from the rights-holder(s).

Note: These citations are programmatically generated and may be incomplete.